In this respect it is exactly like the Right Brachial Chain pattern that also consists of a spine oriented to the right with a ribcage counter-rotating back to the left.

This is why understanding the right tempo-mandibular cervical chain of muscles is so important in a training context. While the R TMCC muscles connect the head and neck and control its movement, it also greatly influences the torso and potentially the pelvis.

The main job of the right TMCC is to turn your head to the left when you are on your right foot, but it also:

– provides support for the scapula.

– controls the range of cervical rotation, lateral flexion, and sagittal plane activity of the neck and head.

– controls the motion of the mandible. This is critically important, particularly to dentistry, yet virtually no one pays any attention to it.

The mechanics of the cervical spine are really quite intricate and it’s almost impossible to convey proper neck movement over a blog post. So I will just touch on some important aspects of this R TMCC chain of muscles and how it effects the the parts of the body that we deal with in strength and conditioning: the torso and pelvis.

In the picture below, due to how I placed my ribcage, my neck is positioned in a state of left lateral flexion, it is forced to bend to the left in order to maintain a horizontal line of sight.

Importantly, I didn’t put my neck in that position. It was forced into that position due to how I positioned my torso, and my torso position (right BC pattern) is due to the position of my pelvis (left AIC).

So just because someone has a right TMCC pattern it doesn’t mean that they have a neck problem. It often just means that their neck has a pattern of over-active muscular activity due to the position of the ribcage and pelvis underneath. Quite often repositioning of a pelvis will clear up the right TMCC pattern, too. Remember, it’s all connected! 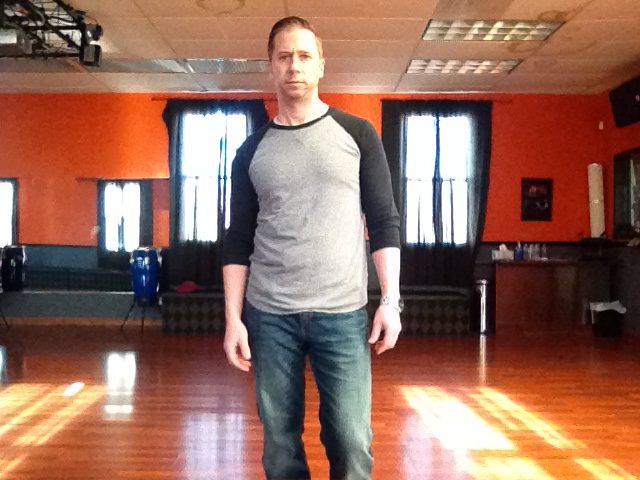 Right TMCC Influence on the Torso

In a training context, the main reason we need to understand the role of the right TMCC is because there are a few muscles of this chain that will prevent the attainment of full neutrality of the rib cage and pelvis if we can’t shut them off.

They are the right scalenes and the right SCM (sternocleidomastoid).

Technically, the scalenes are part of the Right Brachial Chain in PRI nomenclature, but practically speaking, they do influence the head via their respiratory influence on the right upper ribs and sternum. In the right TMCC pattern, these two muscles are active in attempting to sidebend the neck to the right while the SCM also becomes quite active in turning the head to the left.

The right scalenes, which run from the cervical vertabrae down to the first two ribs, will often attempt to pull the ribcage up on the right side to facilitate air-flow that has been compromised by the torso’s counter-rotation to the left. In this counter-rotated position of the torso, the upper right chest area is compressed, and no longer expands upon inhalation.

The SCM runs from just behind our ears, at the mastoid process of our temporal bones at the base of the skull, to our sternum. They are big and they are strong. They primarily function to sidebend (laterally flex is what PRI calls it. Sidebend is used for cranial torsion patterns) our neck and rotate our head to the opposite side. So my right SCM will laterally flex my neck to the right and rotate my head to the left.

That right SCM also has an outsized role in the right TMCC pattern due to its influence on the right temporal bone. Discussion of temporal bones and the rest of the cranium is where things get really complicated, so I am only going to briefly mention them.

If breathing is compromised by a restricted Right Brachial Chain  so that our right chest wall will not expand sufficiently upon inhalation, it is likely that we will have a spine that is oriented to the right.

The right scalenes and SCM are forced to kick in to help us breathe by attempting to pull the ribcage up on the right side (if it can’t expand, where else can it go but up?).

In this case the right SCM will become overactive and the right TMCC pattern is more likely to develop.

Practically speaking, if brachial chain neutrality is what we are after, it may be impossible to achieve if someone has developed a strong R TMCC pattern and thus have a right SCM and scalenes that won’t shut off.

I ran into this problem numerous times, not only with others but also myself.

No matter what brachial chain inhibition technique I used, I couldn’t get full neutrality. Learning about the influence of the RTMCC pattern made me realize that I wasn’t doing anything incorrectly, it was just that I didn’t yet understand the whole system.

Understanding how to turn off an overactive R TMCC now enables me to usually get full neutrality in the brachial chain.

Interestingly, it is possible that someone could have a R TMCC pattern that is “weak”. What I mean is that someone could be in that pattern yet you never have to do anything specific for it. It’s not infrequent that just doing a pelvis repositioning technique will also shut off the right brachial chain and the right TMCC at the same time.

Other times, particularly if there is a vision, occlusion issue, or history of physical/emotional trauma/abuse or whiplash, the RTMCC pattern might be “stronger” and more difficult to turn off.

In that case, you may experience a lot of frustration when all your Left AIC and R BC techniques don’t seem to be working or just won’t stick. It could be the RTMCC that is interfering with the process.