Securing the Left Hip: The Importance of Left AF/IR

Shifting into Left AF/IR and building strength in the left hip is the beginning of every PRI based lower body program. However, the concept of AF/IR can be confusing in the beginning. For those unfamiliar with the term, AF/IR stands for acetabular-femoral internal rotation. This describes the movement of your pelvis as it moves on top of your femur (leg bone). The acetabulum is your “hip socket”. As you walk, run, squat, lunge, or simply shift your weight to your left foot, the acetabulum has to move properly on top of the femur. It has to internally rotate.  If the acetabulum does not move properly on the femur, you will not move correctly. In this respect, It’s not a matter of if you will hurt, it is a matter of when you will hurt. On the right side of your body, the acetabulum is moving into internal rotation on the femur all day long. Right AF/IR is easy to achieve (it’s actually being overdone). On the left side, it’s happening in a limited fashion or hardly at all. This is due to the way we are asymmetrically put together as humans. When you are new to PRI, sometimes you assume you have gotten your client to achieve AF/IR because you repositioned their left hemi-pelvis. This is not really the case. Simply repositioning a left pelvis is just the first step of achieving true Left AF/IR. Repositioning gives you the possibility, the potential, to achieve full Left AF/IR. It gives your acetabulum the position it requires to be able to move on the femur into internal rotation. So beyond repositioning a pelvis in the sagittal plane, attaining Left AF/IR involves restoring frontal and transverse plane movement of the pelvis and femur. As you work to get Left AF/IR you will often come across individuals who have very weak left hips. Securing that hip becomes a top priority. Fortunately, some of the same exercises that we use to restore frontal and transverse movements of the pelvis and femur are the same exercises you will use to begin to secure the left hip. The origins of a weak left hip are shown in the picture below. 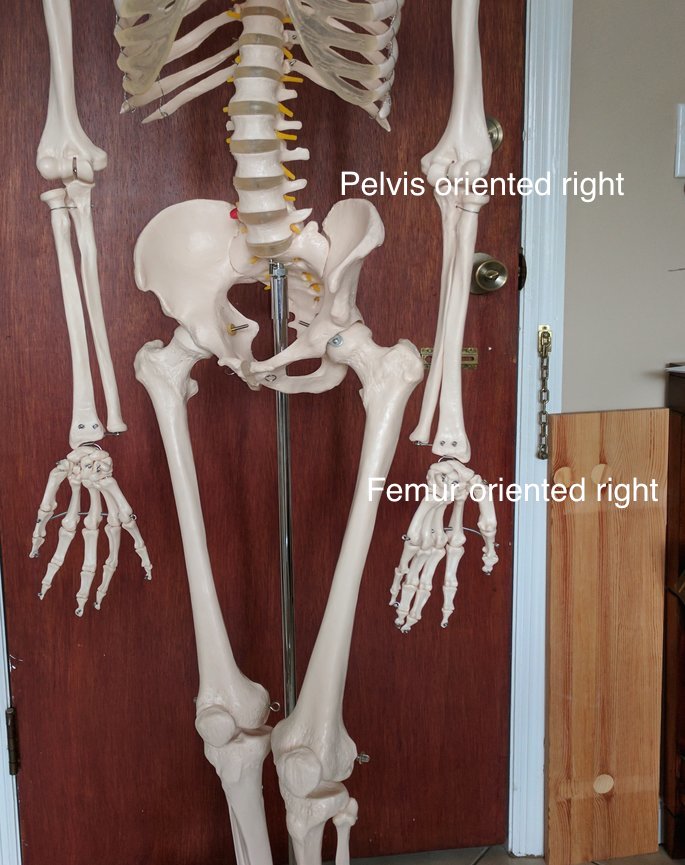 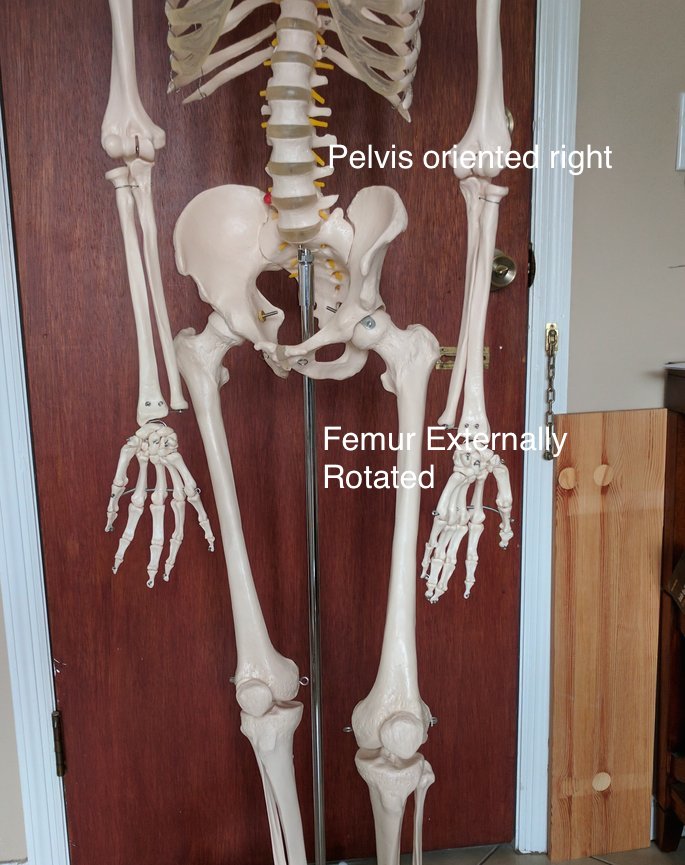 Individuals whose testing indicates that they have lost the ligamental integrity of their anterior left hip, displaying ligamental laxity, have weak left hips. You know someone has lost ligamental support through PRI testing relationships. For example, take two theoretical tests. Normal human biomechanics may dictate that if theoretical test 1 is positive, theoretical test 2 should be negative. If you find that theoretical test 2 is also positive, this means something has gone wrong with the subjects body. Something had to occur outside of normal expected human biomechanics for Test 2 to be positive at the same time Test 1 is positive. One such relationship is that between the adduction drop test and the hip extension test. If someone’s adduction drop test is positive, meaning their leg can’t adduct due to an anteriorly rotated pelvis, they should not be able to extend completely. That is not a normal kinematic relationship. If someone has a positive adduction drop test, yet can extend their hip completely, they are considered in PRI to be “pathological”. In other words, if you find a positive adduction drop test, you should not find a negative extension drop test (you want a positive extension drop test). This is because if you can’t adduct your leg fully, you should not be able to extend your leg fully. If you can, your leg has done something funky to get that hip extension range of motion. Eventually we want both tests to be negative, but not until you can adduct your leg. When you can adduct fully, you should be able to extend fully. If you can’t adduct fully, you don’t want to be able to extend fully. If you can extend fully on a leg that can’t adduct fully, you’ve likely stretched out your hip ligaments to do it. So pathological describes an aspect of a pattern that goes beyond what is normal. In other words, a patho individual is someone whose body is doing something it shouldn’t be able to do when it is in the position that it is in. These pathological hips are the hips that you really have to work at securing. When you lose the ligamental integrity of the anterior hip, you find that the left leg is no longer sitting snugly inside the acetabulum. Due to the fact that the left hemi-pelvis, and thus the acetabulum, are oriented to the right, the left leg will often externally rotate back to the left in order to stay straight. Left hemi-pelvis is oriented right, left leg orients to the left as a compensation. This external rotation, coupled with the demands of an individuals normal life, the activities they participate in, the sports they play, stretching, all of these factors can contribute to someone loosening their ligaments. And once ligaments are loosened, there is no way to get them strong again without surgery. This is why it is often necessary to work a bit harder to secure the left hip, generally by really strengthening the anterior fibers of the left glute medius, the IC adductor, and the medial hamstrings. All three muscles will work together to position and hold the femur inside the acetabulum so that true Left AF/IR can occur and held during dynamic tasks. The video below explains a bit more about how a weak left hip occurs and the type of issues it can lead to. In this case I talk about left SI joint pain. But in reality, the consequences of left hip weakness can manifest themselves in various locations of your body.

The first step in establishing Left AF/IR is re-positioning the pelvis in the sagittal plane. Generally, we use the left hamstring to pull the left pelvis posteriorly (backwards) from it’s previously anteriorly (forwardly) rotated position. If successful, the left adduction drop test will go negative. But you sometimes may find that although the left leg is now adducting more than it did before, it may not go down all the way to the surface upon which your client is lying, you may feel some restriction, or it may not be a smooth drop (for lack of a better way of explaining it) There are two main reasons this could be happening: First, you could have a tight posterior hip capsule. A tight posterior hip capsule will prevent the left femur from sitting snug is the acetabulum since it won’t allow posterior movement of the femur. Second, the left femur may have externally rotated itself out of a good acetabular/femoral position. It can also be a combination of both since they often occur together. Regardless, the next step is crucial to understanding what true Left AF/IR will feel and look like and what you need to see before a PRI program will work really well. You need to roll the head of the femur into the acetabulum. Just because you have repositioned a left hemi-pelvis, it doesn’t mean you have gotten true Left AF/IR. It was at Northeastern University in Boston during the Myokinematic Restoration seminar where James Anderson uttered this slogan that has stayed in mind ever since, and one I’d recommend everyone just starting out to learn well

"You Must Approximate Before You Can Rotate"

The right sidelying adductor pullback is designed to “roll” the head of the femur into the acetabulum so that it fits snug and allow for good Acetabular-Femoral and Femoral-Acetabular movement. We do this by recruiting the ischiocondylar (IC) adductor. At the same time, if the left posterior hip capsule is tight, the “pullback” part of the exercise can stretch it so that it will now accept the head of the femur. There are times where this pullback is not enough and use of special posterior hip capsule stretching will be necessary.
Although I didn’t do it in the video since I didn’t have one on hand, you can place a small ball, a few inches in diameter, in between your feet. This is actually the way it is shown in the manual. It is not always necessary however. If done correctly, you’ll feel the exercise high up in the groin area of the left side. Be aware, it is not a comfortable feeling. Some people will experience some soreness the next day.