The Postural Restoration Institute’s 90-90 Hip Lift Technique is one of the standard exercises that is used to reposition a pelvis and ribcage in the sagittal plane. It is used for individuals who are in an anterior pelvic tilt on both sides and who have an extended lumbar spine on both sides. These individuals are collectively labeled PEC.

PEC stands for posterior exterior chain. This chain of muscles includes the quadratus lumborum and paravertebrals that are tight and restricted.

In the PEC (more accurately referred to as bi-lateral PEC) this chain of muscles is overactive on both sides. They are also collectively known as the back extensors because they extend (over-arch) our lower back. A PEC is extended on both sides.

Normal human gait (walking) requires one PEC chain to be active while the other is inactive. So when the PEC chain is active on the left, the PEC chain on the right should be inactive.

But a PEC has both sides active at the same time.

As you can see in the image below on the left, having two PEC chains active simultaneously involves a whole lot of muscle.

On the right, you see the hip flexors. They are also generally overactive in the PEC pattern.

All this muscle is located in the front and the back of the body. This makes PEC patterned individuals very “forward and back” type people. 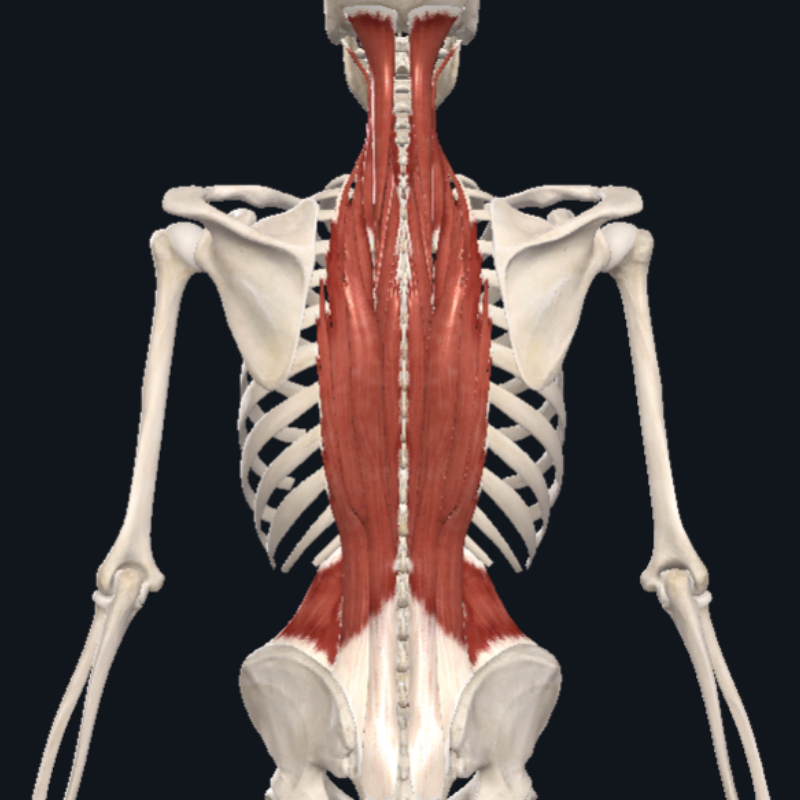 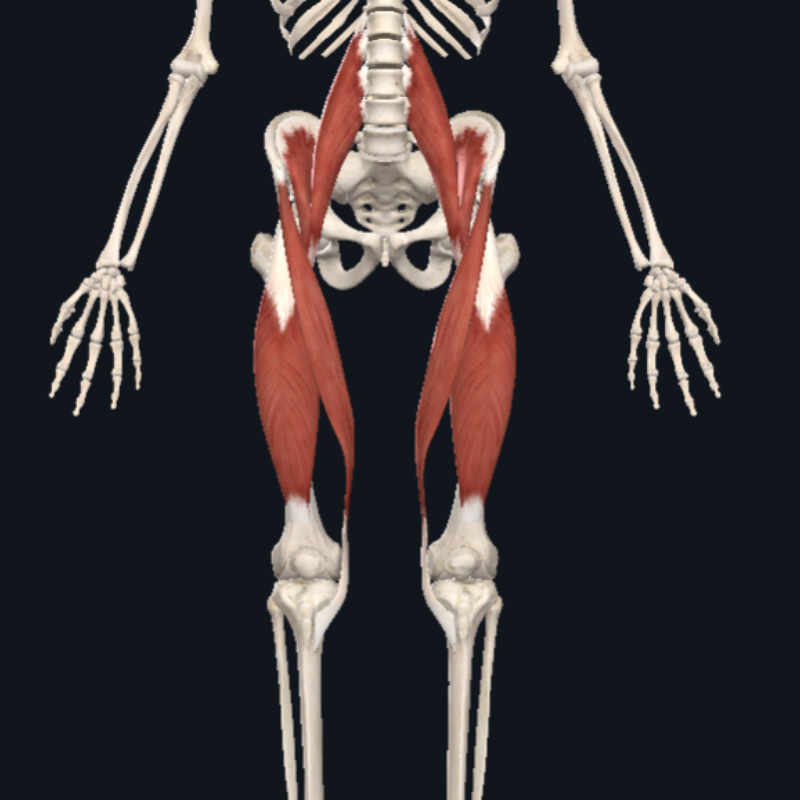 The Frontal Plane is Life

PEC’s most glaring weakness is the fact that they have no stability of their pelvis in the frontal plane. Their pelvic stability is only coming in the sagittal plane from the hip flexors and lower back extensors.

So what’s the big deal?

For starters, walking is primarily a frontal plane endeavor, we simply must have a functioning frontal plane that uses our abductors and adductors. Otherwise we will have to move with compensation. 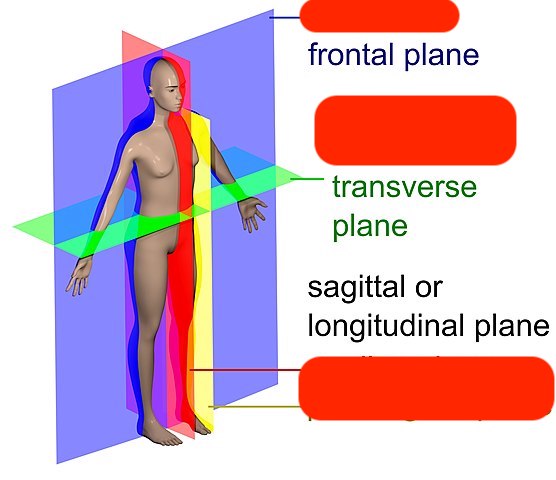 The frontal plane is the imaginary line that divides us into a front and back (the purple-bluish plane in the image above). The two movements that occur in the frontal plane are abduction and adduction of our legs, arms, neck, pelvis, and ribcage. A few examples of frontal plane movement that occur during walking that must be preserved:

Similarly, to breathe with our diaphragms, we need to preserve (or restore) our frontal plane.

While a functioning frontal plane depends on proper alternating rhythm, shifting the center of gravity back-and-forth between the left and right sides of the pelvis, PECs don’t have that going on. Once a pelvis is stuck in an anteriorly rotated resting position, the individual loses all the abduction and adduction movements listed above to one degree or another.

Frontal Plane in the Left AIC/Right BC Pattern 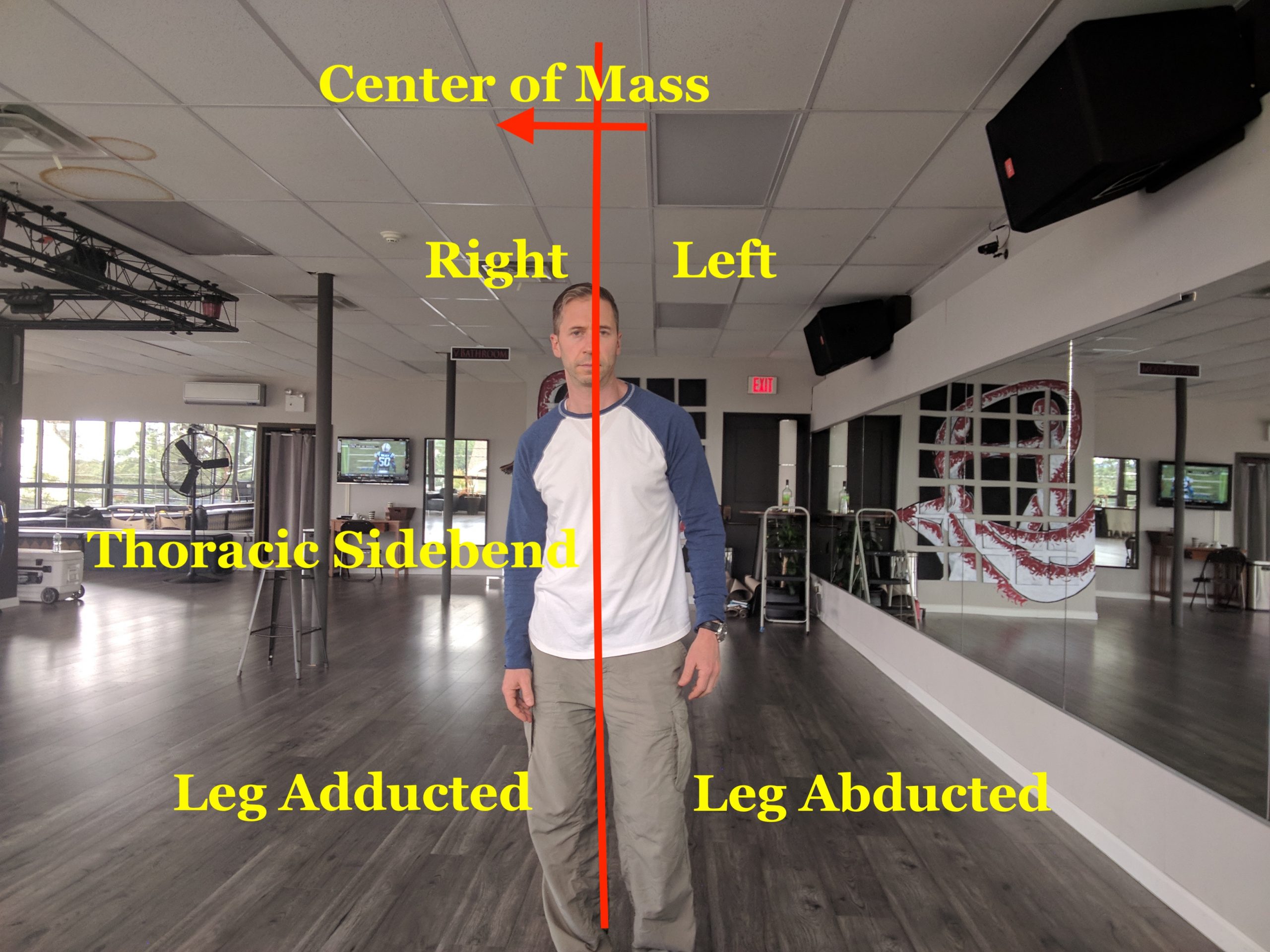 While you read this post, keep in mind that underneath every PEC is the original left AIC right BC pattern. A PEC is a compensatory position someone ends up in to deal with the original underlying pattern. It’s just a step up the compensatory ladder.

The image above shows frontal plane compensations occurring in the left AIC right BC pattern. The right side is

The left side is

to visualize the PEC all you have to do is imagine that the right and left sides of the body are doing what the left side is doing. Thus a PEC is

In the PEC pattern, the hamstrings and abdominals, the primary pelvic stabilizes from the top and bottom, are disengaged.

Both sets of muscles are lengthened and weakened due to the prolonged amount of time that the pelvis is stuck resting in an anterior pelvic tilt on both sides.

On the other hand, the hip flexors and back extensors are overactive for the same exact reason, prolonged amount of time spent in an anterior pelvic tilt on both sides

Nor should both sides of the pelvis be in an anterior pelvic tilt at the same time.

This is normal stance/swing phase of gait pelvic movement. The right and left sides of the pelvis should be moving in the opposite direction of each other at all times.

Alternating anterior and posterior tilt between sides is the proper gait rhythm.

The opposite movement between sides is hugely important because it allows for rotation to occur. Rotation, which happens in the transverse plane, is the highest evolutionary movement that we have and must be maintained at all costs.

When normal pelvic mechanics breakdown, so that both sides of the pelvis are stuck in an anterior pelvic tilt and the spine is extended, normal transverse rotation is limited almost everywhere.

Importantly, an extended spine can not rotate.

This is what makes a PEC a PEC.

The inability to rotate through the thoracic spine.

If someone can’t rotate through their thoracic spine, they’ll be forced to find rotation somewhere else.

And that “somewhere” is the lumbar spine and SI joints.

PECs are locked up, stiff, compensatory rotators, and often suffer from SI joint, low back, and neck pain.

In an odd juxtaposition, PECs are both too stable and not stable enough.

The anterior pelvic tilt is causing them to be too stable from front to back (sagittal) but too unstable from side-to-side (frontal).

In fact, their side-to-side movement (frontal plane) is so limited that they have to cheat to do it. After all, just because your frontal plane muscles are dormant doesn’t mean you don’t need to move from side-to-side.

You will still move side to side, but you won’t use your frontal plane muscles, adductors and glutes, to do it.

Instead PECs have to use their quads for side-to-side stabilization and push.

This is why you see such over-developed quads, particularly the vastus lateralis.

The VLs are basically playing ping-pong with your pelvis, trying desperately to not allow you to fall over, while also pushing you back to the other side as best they can.

Of course, the VLs can’t do it very effectively, so frontal plane movement is always very limited in PECs.

You’ll see a bunch of “butt wiggle and jiggle”, but the pelvis never actually shifts.

Furthermore, to add insult to injury, because PECs are so sagittal plane dominant, and their frontal plane is completely compensatory, their brain detects this as a threatening situation and thus “protects” them by keeping them in the PEC pattern, the pattern they so desperately need to get out of! 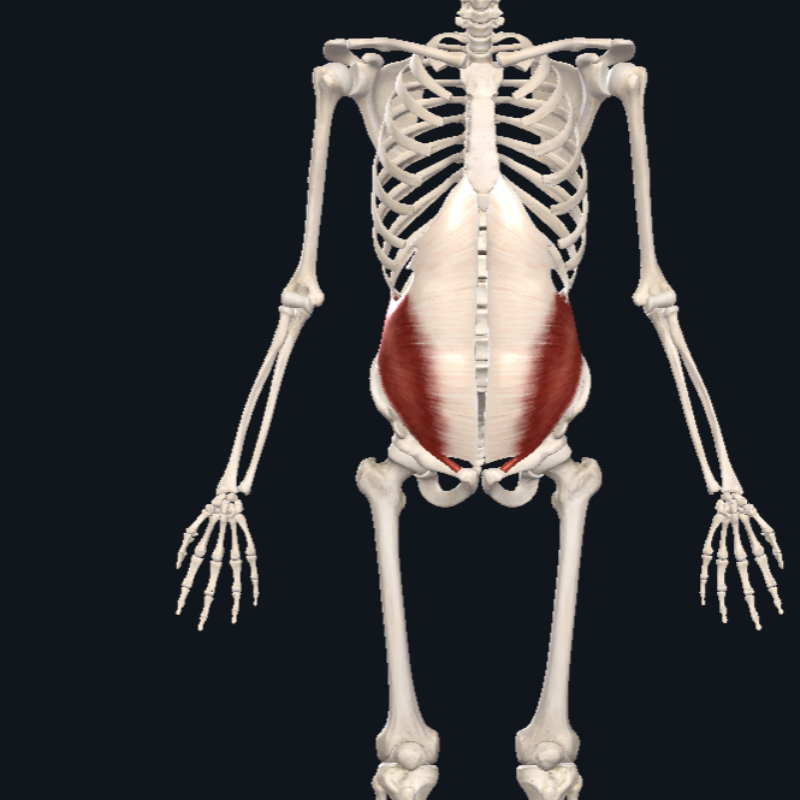 Internal obliques will pull the front/side of the pelvis “back and in” to help establish AF/IR on both sides. 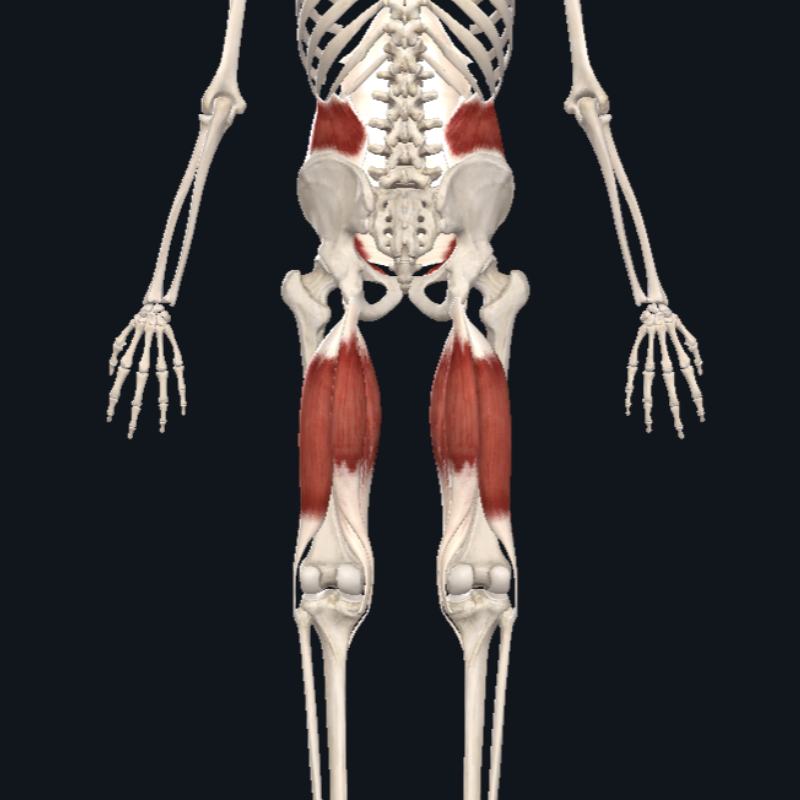 Hamstrings will help pull the pelvis posteriorly and down and also internally rotate externally rotated femurs.
To get a PEC patterned individual out of their bi-lateral anterior pelvic tilt, they need to learn to re-engage the hamstrings of both legs and the internal obliques on both sides, but to be truly effective it must occur with sense of their heels and proper breathing mechanics.

PECs usually do not have good sense of their heels.

What does that mean?

If I ask a PEC to assume a natural stance without shoes on, and sense where they feel their weight, they will quite often say the outside of their feet and towards the forefoot. They generally won’t say their heels.

If they do say their heels, I make sure they aren’t locking their knees. They usually are. “Knees locked” is a compensatory strategy to stabilize their unstable pelvis.

They may also tend to stand with their legs in a wider than normal position to find a more stable base of support.

When a pelvis is forward on both sides, the individual’s spine moves forward, meaning their center of mass moves slightly forward. That is why they feel their weight towards the forefoot.

They feel the weight on the outside of their feet because when a pelvis is forward on both sides, the legs below it may have to compensate by externally rotating.

This externally rotated position tends to put a foot into a position of supination. A supinated foot will have an inverted heel (points in) and higher looking arch. This effectively places their weight on the outside of their feet.

The only thing that will pull the pelvis out of its anteriorly rotated position and into a neutral state is the hamstrings. That’s their primary job. But because someone is stuck in a PEC pattern, the hamstrings have become dormant. They have to wake up! 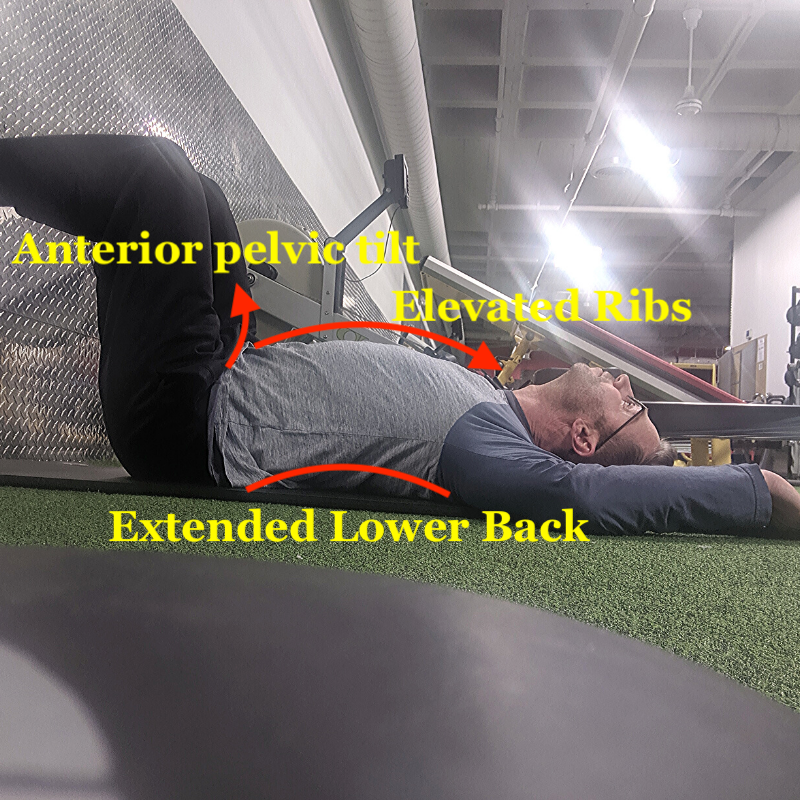 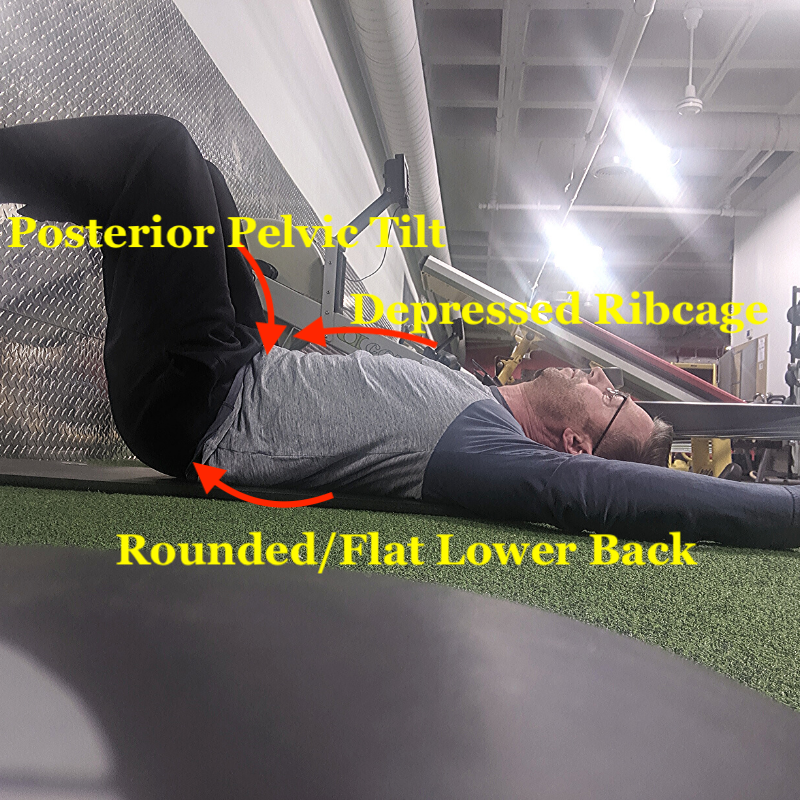 The hamstrings can’t do their job effectively as posterior rotators of the pelvis if they don’t get support from above.

That support must come from the internal obliques.

However, the internal obliques can only do their job correctly if the hamstrings do their job at the same time!

The muscles function as synergists, as partners, in restoring neutrality to the pelvis and ribcage via putting the entire body into flexion. The internal obliques depress/internally rotate the ribs while the hamstrings posteriorly tilt the pelvis.

That’s why any approach that doesn’t restore proper breathing mechanics is bound to fail.

The only way the internal obliques can rescue a PEC from their bi-lateral rib flare and extended lumbar spine is if proper respiratory mechanics can be achieved.

Non-compensatory breathing requires expansion of the ribcage during inhalation.

This means they breathe with their neck and back muscles. Upper traps, scalenes, and SCMs are usually involved in compensatory breathing.

Obtaining a neutral resting position of the ribcage depends on elongating exhalations to blow all the air out.

Elongated exhalations will internally rotate the ribcage through recruitment of the internal obliques.

Normal tidal breathing will not engage the internal obliques if someone is in an extended PEC state. Only elongated exhalations will.

A PEC’s entire body is extended and externally rotated. They need flexion and internal rotation of their femurs, pelvis, and ribs to get their system back to neutral. This requires:

The 90-90 Hip Lift is designed to do all these things. 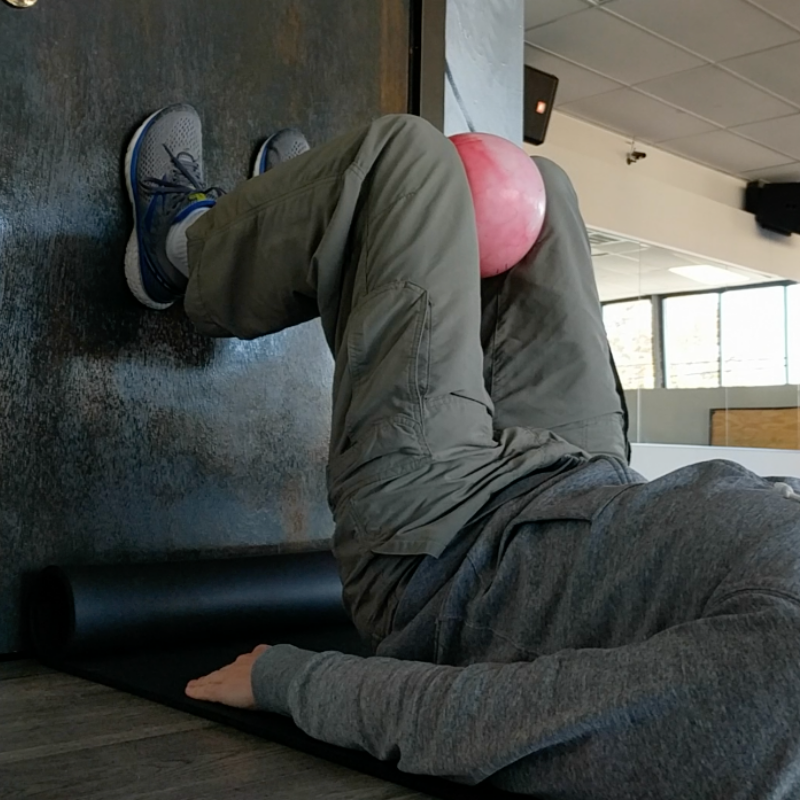 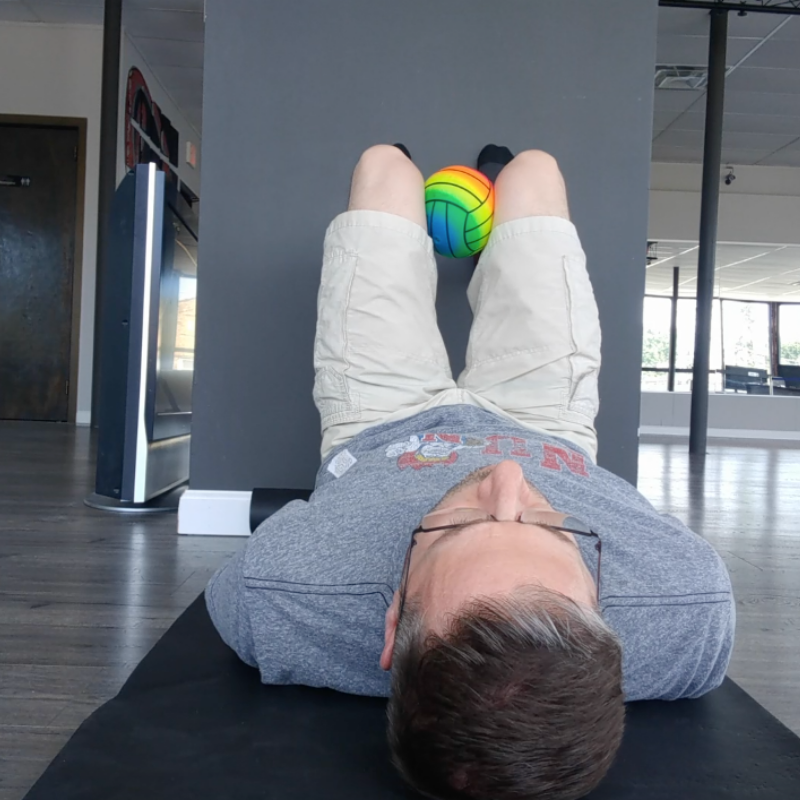