Right Lateralization of Our Human Body

People who are stuck in the Left AIC pattern are stuck in right stance. Their muscles are activating in such a way that their left ilium is rotated (or flexed) forward. The entire pelvis is oriented to the right, and their center of mass is shifted over to the right.

In the first picture below, I asked the individual to lie on the floor with her feet on the wall, knees and hips bent at 90 degrees. This is the position she set up in. Importantly, she did not consciously set herself up with her body leaning to the right. Her brain is organizing her movements and positions like this. If you think in terms of right and left lateralization of the human body, she is lateralized to the right.

In the second picture, taken two weeks later after PRI training, she is in a more neutral resting position. Again, all I did was tell her to put her feet on the wall in the 90/90 position. Her brain did the rest. 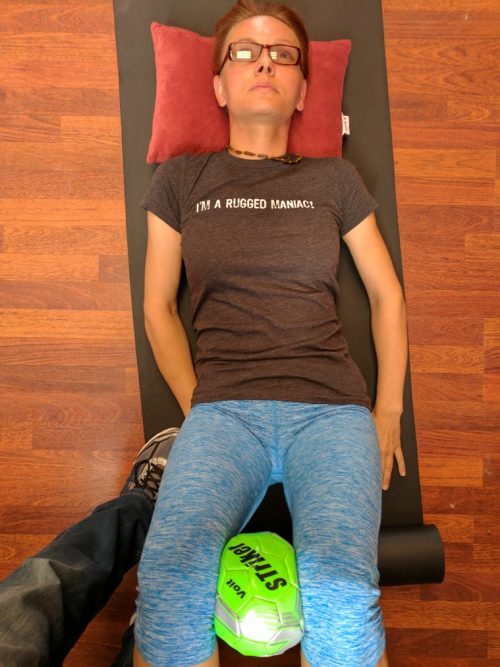 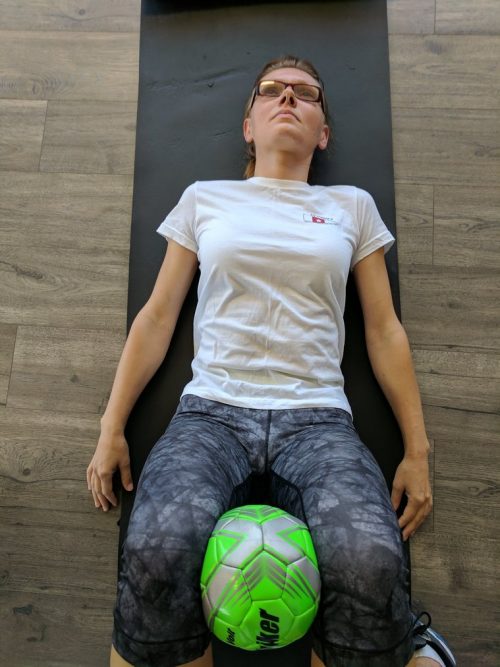 The main point of this post is to emphasize the following:

Even though this person’s tests were neutral, her neurological patterning was still pulling her over to the right.

Neutrality means that she was able to pass all her PRI objective tests, indicating that she has full range of motion at the pelvis, ribcage/spine, and neck and her arms and legs.

But she was still neurologically programmed to lateralize herself over the right side of her body.

How we got this to change was:

The picture below is an example of a supported upright exercise that biases her left side. 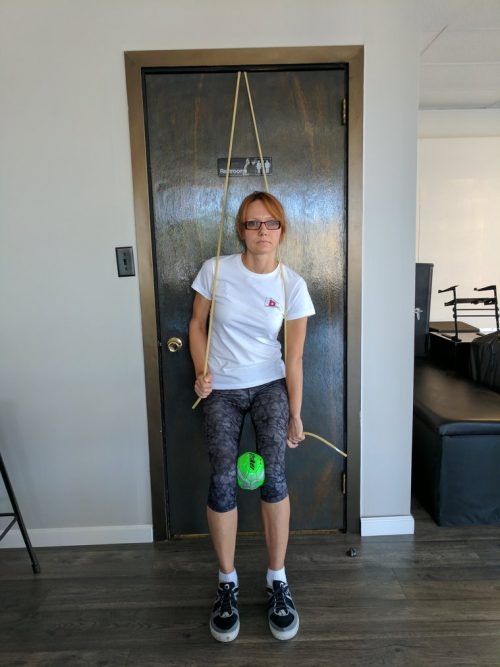 In the exercise above, she has her left hip shifted back to achieve Left AF/IR her anterior (front) ribs are internally rotated (down). This combination creates the all-important Left ZOA.

And, since PRI is just walking and breathing, this is also the position your pelvis and ribs should be in when your weight is placed on your left foot as you walk, also known as left stance.

We lose left stance position due to the development of a pattern of muscular activity that pushes us over to the right and lateralizes our body weight to the right.

As she breathes, her left obliques are activating in an upright position while maintaining this position of Left AF/IR and Left ZOA. She is keeping her left diaphragm engaged so that she doesn’t use her lower back and neck as breathing muscles.

Her left hamstring, left adductor, and left glute medius are fully engaged and internally rotating her left leg and pelvis. She is teaching herself to breathe in Left AF/IR without losing control of her ZOA.

There is a big difference between this and getting neutral. Neutrality is just a starting point.

Here is one of the big keys of PRI.

Getting Left AF/IR as determined by PRI testing is great.

Getting a Left ZOA as determined by PRI testing is great.

It bears repeating again and again, neutrality is just a starting point. Truth be told, some people will feel fantastic after just achieving neutrality, being able to move fully in three planes of motion.

But more often you have to teach people to use their new movement abilities to some degree or another.

Can someone fully shift into Left AF/IR when their weight is on their left foot as they walk or run?

Will their brain use the left side of their body correctly when life gets difficult or physical challenges increase?

As evidenced by the first picture, this particular person probably could not keep her Left AF/IR and Left ZOA through a full day of work.

Even though her tests were neutral, her brain still was biasing her right side and using it too much.

This is why her right lower back would hurt when she got home from work in the evening. However, doing her PRI exercises would take away the pain, probably because they lessened the intensity of her right sided pattern.

While this individual had the potential to achieve left AF/IR and a left ZOA and she had full range of motion in her legs, shoulders, pelvis and upper body, this was still not enough.

She hadn’t built the strength in her left hip and abdominals sufficiently enough so that her brain would allow her to stop using the right side of her body so much.

This situation is not uncommon.

If your left side is weak you are going to start using your right side even more. Then the right side starts to hurt due to overuse.

This individual’s brain had a strategy of turning up the intensity on her right side when the demands of her physical life (and perhaps mental life) increased. It would have been better served to use the left side more, but the left side was still weak. So she defaulted to her right side. The right side of her back hurt as a result. And it didn’t hurt just a little. It hurt a lot! It made life miserable for her.

After doing PRI exercises that taught her brain to get off her right side and integrate Left AF/IR and left ZOA into her life, she is in a much straighter resting position.

She transitioned from having the potential to get left AF/IR and left ZOA to actually using it.

Not surprisingly, her back is feeling a lot better and I would venture to say that her life is happier, too.